Last time we talked about performance in JavaScript and how that can be measured. To better illustrate the usage of the performance.now function and how it can be used to help us decide which method we should use to accomplish a certain task in our code, this time we will test the 3 most common methods of selecting a specific DOM element:
• jQuery’s $() selector is probably the most common and the first one that comes to mind
• document.getElementById is the classic method and perhaps the function that most JS developers are taught first
• document.querySelector is a relatively recent addition to the DOM API that’s supported by the latest browser versions out there

Test Case
Obviously the selection of one single DOM element is very rapid so it’s not the best of ways to test for the efficiency of those 3 methods. We’re talking about an operation that takes nanoseconds (or even less..) to finish. So even if we had the means to get test data about such a small timeframe it still wouldn’t be a fair comparison since there countless of factors affecting the final result, like different browser threads or even different processes running on the system. To get a better understanding we need to enlarge our test pool. For that, in the following example we will use a for loop to spawn 10 thousand buttons, append them to the DOM tree and them we will use the 3 methods mentioned above to select all the buttons, one button at a time using for loops. So we want to end up to something like the following pseudocode:

After the tests are done, hopefully we’re going to have a clear answer as to which one of these methods we should use to speed up our script’s execution.

The following is a simple algorithm used for spawning a button with id ‘id’, inside ‘container’ with text content ‘contents’:

We will also need a container div to host the remarkable amount of buttons we’re about to create:

We select the div element using getElementById (or maybe we should use jQuery, it might be faster, or querySelector, anyway we’ll see in a moment 😛 )

We also need to introduce a naming scheme for the 10k buttons so that we don’t have a hard time selecting them from the inside of a loop. It doesn’t have to be something complex. “btn-i” where ‘i’ is the incremented value will do just fine. So let’s spawn the buttons!!

If you run the script at this point, your browser window will fill with buttons capable of causing a seizure to people with light sensitivity but bear with me a little while longer and we’ll soon know which is the fastest method.

Let’s declare some required variables for our tests:

And start them finally:

Running the tests I got these results (I ran each test three times to get a more definitive answer): 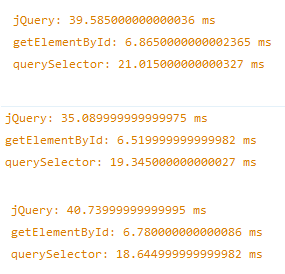